Our two little kitties are an important part of our little brand new family, but I wasn’t planning on posting a lot about them on this blog because I’m totally not a crazy cat lady. Or…more like I don’t want to sound like the crazy cat lady that I kind of am. 😀

But the idea behind this blog is to share life lessons, fun crafts, DIYs, recipes, and projects that we do to make our lives easier and ourselves happier, and the kitties definitely have a place in that. So starting today the last Saturday of the month will be “Caturday” at Practically Functional and I’ll put up a pet-related post for all of you other crazy cat ladies out there! (Or all you sane pet owners, whatever works.) 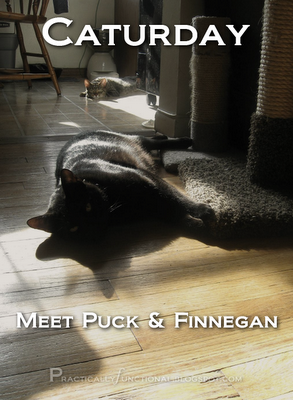 I want to start Caturday off by introducing our cats to you.

When we went to the shelter to adopt these kitties we knew we each wanted to pick out one kitten, and we already had names chosen. I had chosen the name Finnegan, and JonMarke wanted to name his cat Puck. JonMarke found a cute brown tabby kitten right away and decided that this would be his cat. A few minutes later I decided the adorable spunky black kitten would be mine. But the names we had picked out didn’t match the personality of the kittens we chose, so we switched names!

Puck, my spunky, black, troublesome kitten turned into a giant, black, laid-back cat. Unless you have cats this won’t mean much, but this cat weighs 15 pounds, which is very large for a domestic short-hair cat. And he manages to pull that off without being fat; he’s just big-boned, I swear! He’s mellowed out a lot and now he likes to cuddle and just sit around.

I’m so thrilled with the photo above, I can’t believe I managed to get that glamor shot of him. He looks debonaire and poised, which never happens. Usually he looks like this:

Finnegan on the other hand, went from being a tiny, brown, playful kitten to being a tiny, brown, playful cat. He’s only about 11 pounds, which is average for a cat, but in comparison to Puck he’s miniscule! He’s the troublesome one now; he’s always pulling dishes out of the sink or knocking stuff off of the fridge. I think he just likes being high up cuz he’s also thrilled that JM lets him perch on his shoulders. He’ll sit there staring at things from a “tall” perspective as JM walks around doing stuff.

He also loves cardboard boxes, and because we’re bad cat parents we indulge him. It’s adorable when he’s crawling around inside them and sticking his little head out. But by “loves cardboard boxes” we actually mean “loves to eat cardboard boxes”, so cleaning up the tiny, chewed up remnants of the boxes a day later isn’t actually that awesome. But he’s cute!

Okay, enough cat pictures. Did I mention that I am NOT a crazy cat lady? I promise!

How about you, do you have any furry friends that are part of your family?

Want to see the rest of the Caturday posts? Here they are!

« Finance Friday – Lesson 10: Learn To Think About The Future
How To Transplant Seedlings [Herb Garden Series] »