Home > Cleaning > How To Clean A Dryer Vent – Remove lint and prevent fires!

When the heat turns on in the winter, it dries out the air and everything gets staticky. Static electricity is annoying when you accidentally shock yourself while walking around the house, but it can also be incredibly dangerous if it ignites lint that has built up in and around your clothes dryer. You can hire a professional to come clean your dryer vent, but that gets expensive, and you can do it yourself in about fifteen minutes! Today I’m going to show you how to clean a dryer vent to remove any lint build-up and prevent the possibility of a fire! 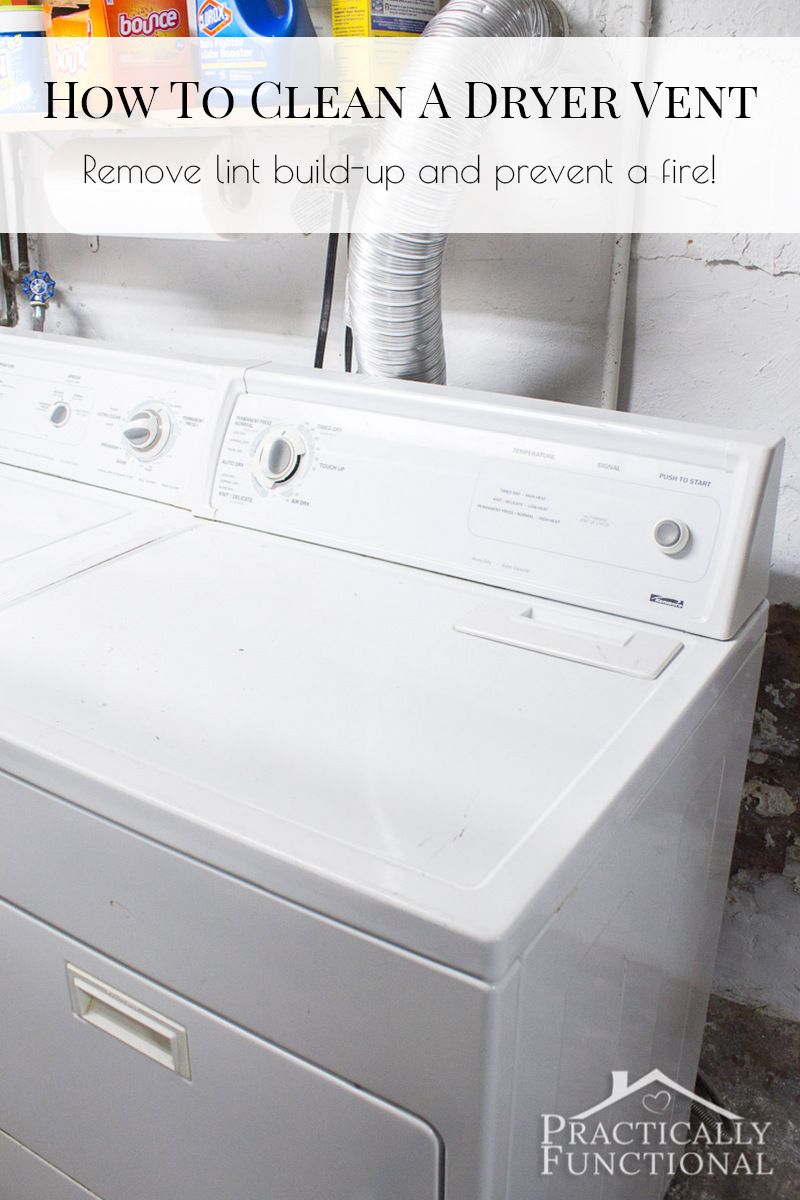 It’s actually quite simple to clean your dryer vent, as long as you have access to the vent hose. If you can see the entire vent hose from where it connects at the back of your dryer to where it goes out the wall to the outside, then you can clean out the lint build-up yourself!

How To Clean A Dryer Vent

You only need a few tools to do this yourself. Here’s what you need:

The first thing you need to do is pull your dryer away from the wall so you can access the dryer vent hose. Unplug your dryer, and turn off the gas if it’s a gas dryer. 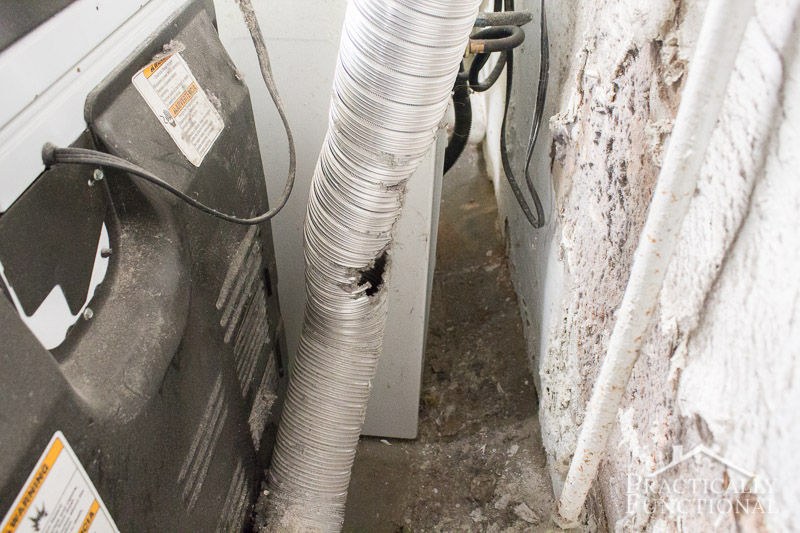 Wait, what?! PAUSE! When I pulled our dryer away from the wall there was a GIANT hole in the dryer vent hose! Ok…this is not supposed to happen folks! But it definitely explains why our laundry area was covered in so much lint!

For 99.99% of you, when you pull your dryer away from the wall, you will see the hose, and some lint, but the hose will be fully intact, as it should be. I have no idea what happened to the dryer vent hose, but I’m sure glad I decided to clean the dryer vent now and didn’t wait any longer!

Once you’ve pulled your dryer away from the wall, find the exhaust port where the dryer vent hose attaches to the wall. 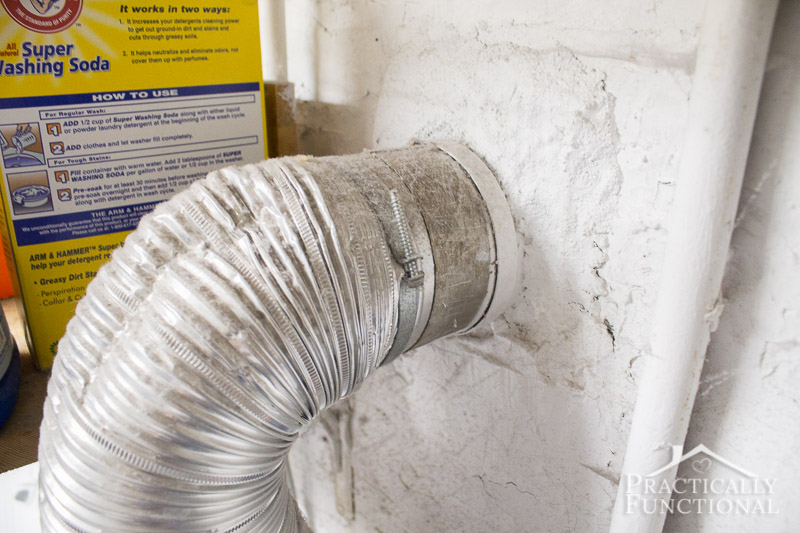 Loosen the screw holding the clamp together, and you should be able to pull the dryer vent hose away from the port in the wall. (There are two main types of clamps for dryer vent hoses: one with a screw like mine in the photo, and one with little metal wire “tabs” that you can squeeze together with your hand. If your clamp doesn’t look like the photo above, it’s probably the other kind, so see if you can loosen it by pinching the two tabs together.) 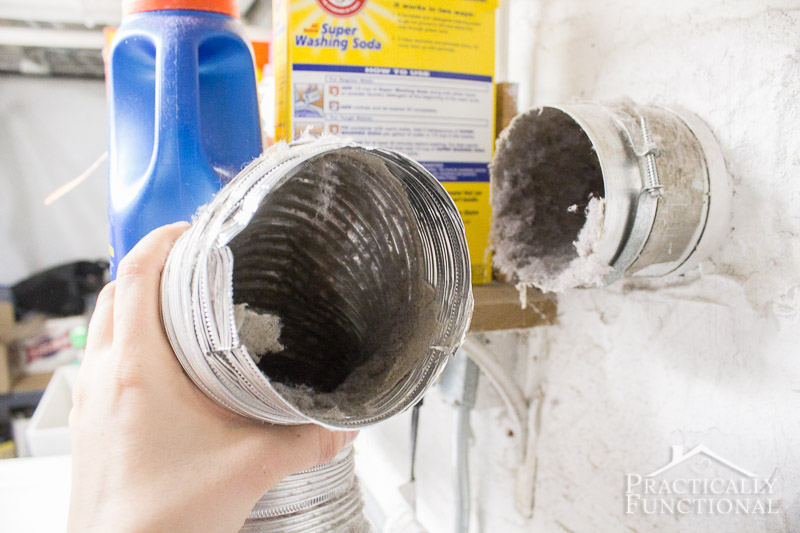 Yikes! We’re extremely lucky none of this ever caught fire! 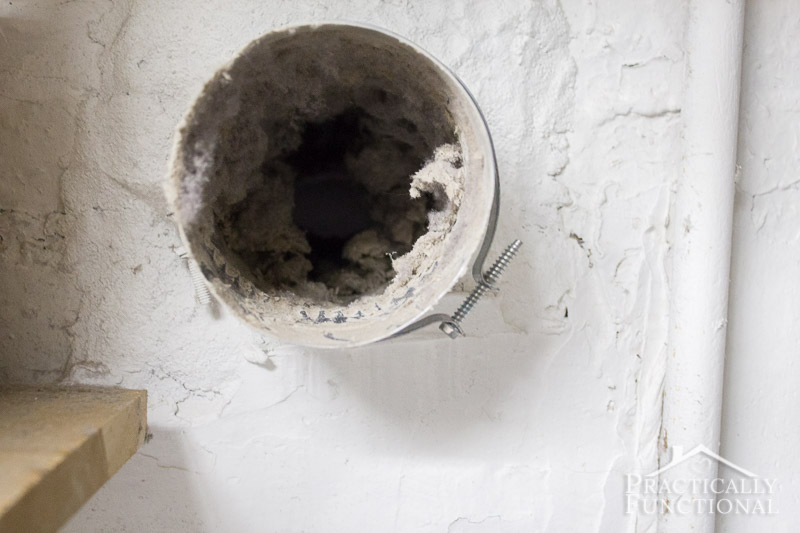 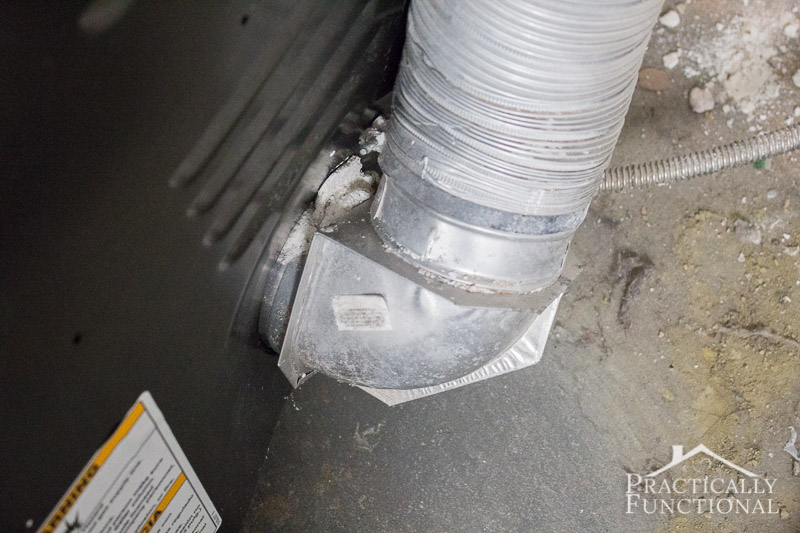 Now you need to clean out all the lint from the hose, from the port in the wall, and from the port at the back of the dryer. I used my dryer vent trap brush to knock the lint loose from the walls of the port. 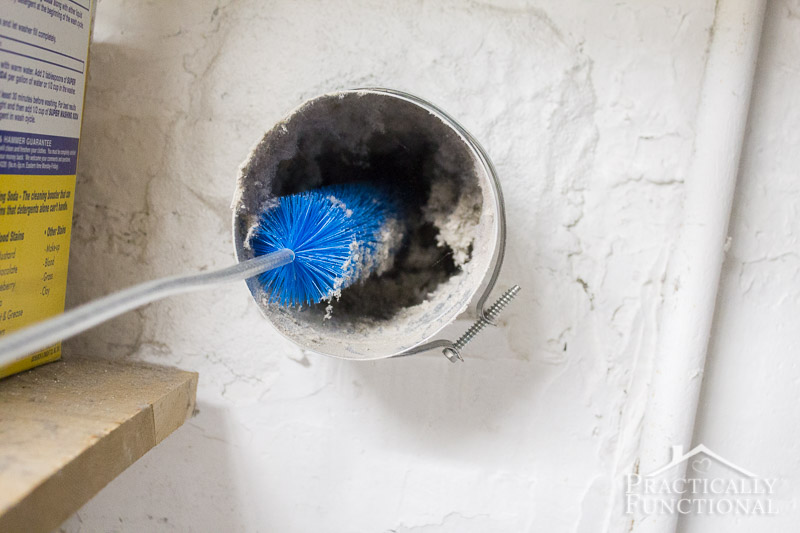 As for the hose, it can be up to ten feet long, so the dryer vent trap brush won’t be long enough to reach everywhere. That’s where the dryer vent duct brush comes in handy! It’s super long, and flexible, so it can snake through the entire dryer vent hose and push all the lint out the other end.

Once all of the lint is knocked loose, grab your vacuum and the lint remover vacuum attachment, and vacuum up all of the lint you can find. You’ll want to clean out the wall port, the dryer port, any lint you knocked loose out of the hose, and any extra lint that happens to be floating around your laundry area. You might as well vacuum off the back of your dryer and clean up any lint on the floor or walls as well; it’s always better to be clean and safe! 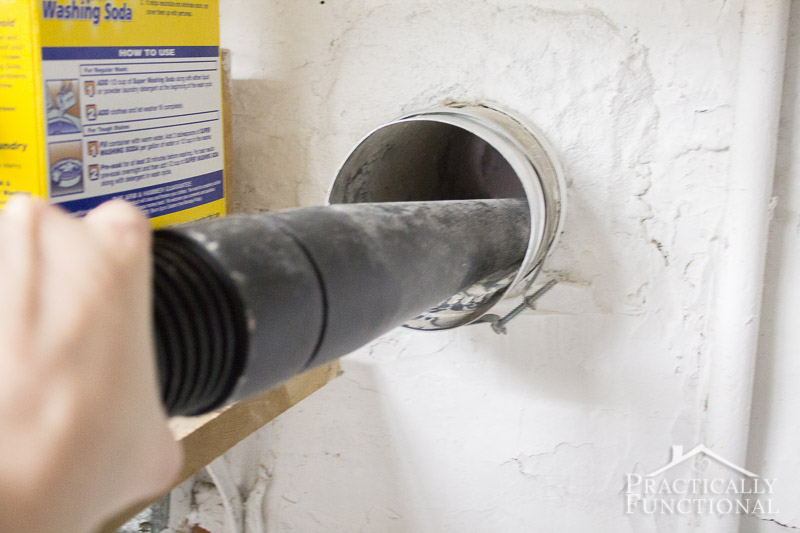 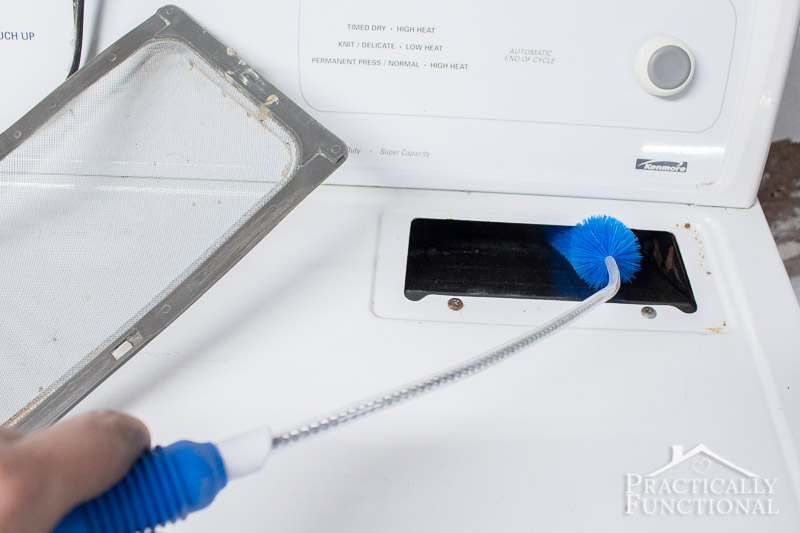 Attach the lint remover vacuum attachment to your vacuum again and use it to vacuum out the lint trap. 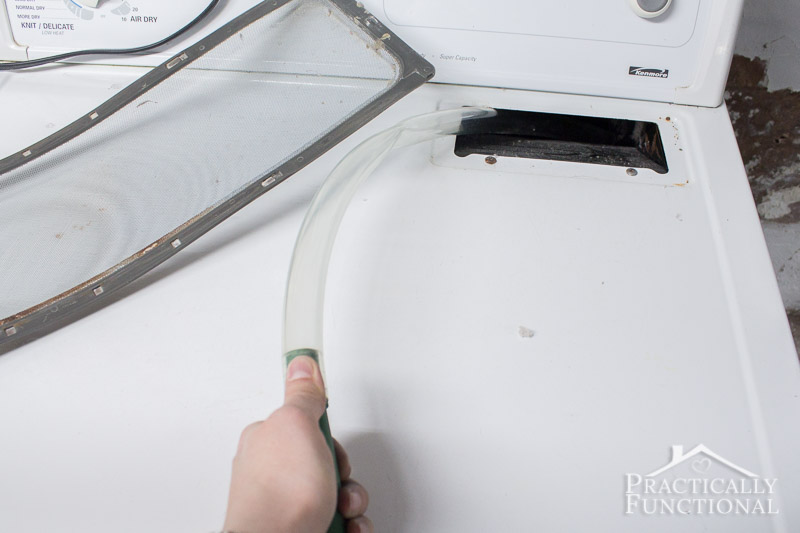 If you have access to the dryer vent exhaust outside, head out there with your vacuum and clean off any lint stuck to the exterior vent as well. And then you’re done!

That wasn’t so bad, was it?! Remember, you should clean the dryer vent once a year to help keep lint from building up and causing a potential fire hazard! 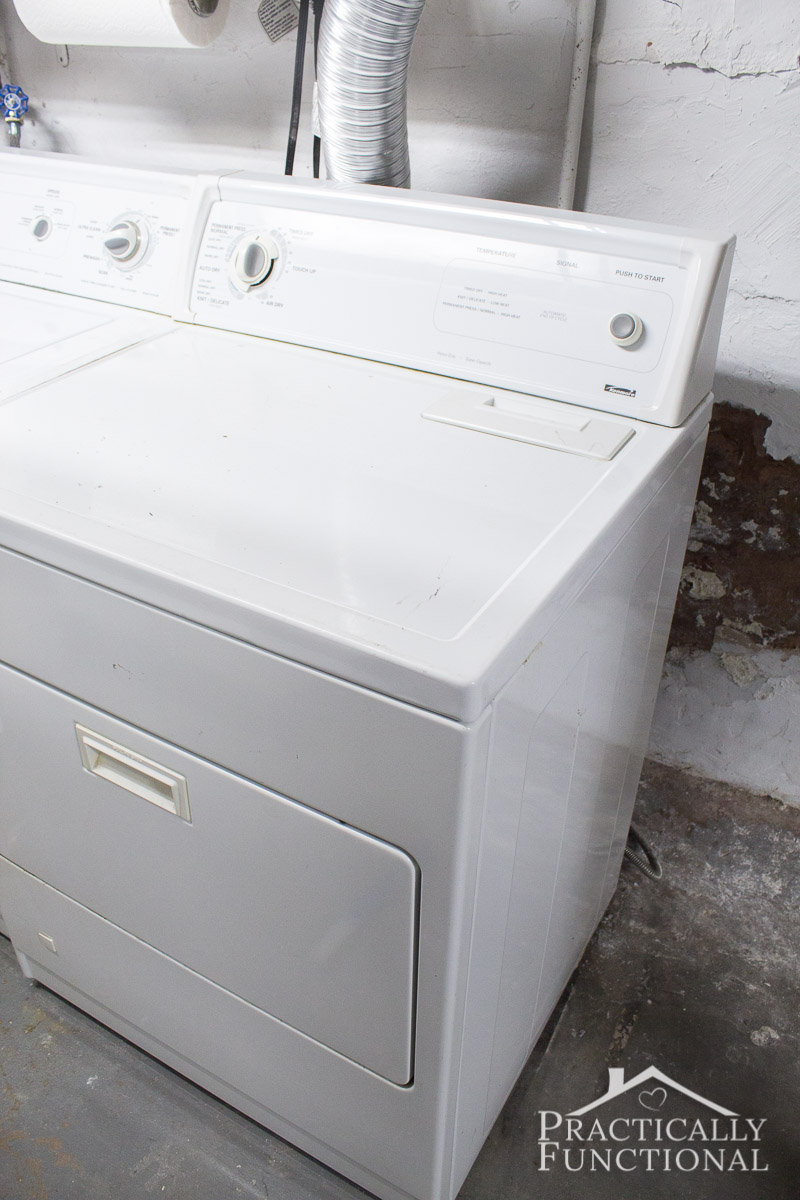 Owner & Blogger at Practically Functional
Hi, I'm Jessi! Welcome to Practically Functional, a DIY and crafts blog for everyone! I believe that anyone can do crafts and DIY projects, regardless of skill or experience. Whether you're looking for simple craft ideas, step by step DIY project tutorials, cleaning hacks, or just practical organization solutions, you'll find them here! Make sure to sign up for the email newsletter to get craft projects, Cricut tutorials, and cleaning tips in your inbox every week (for free!)