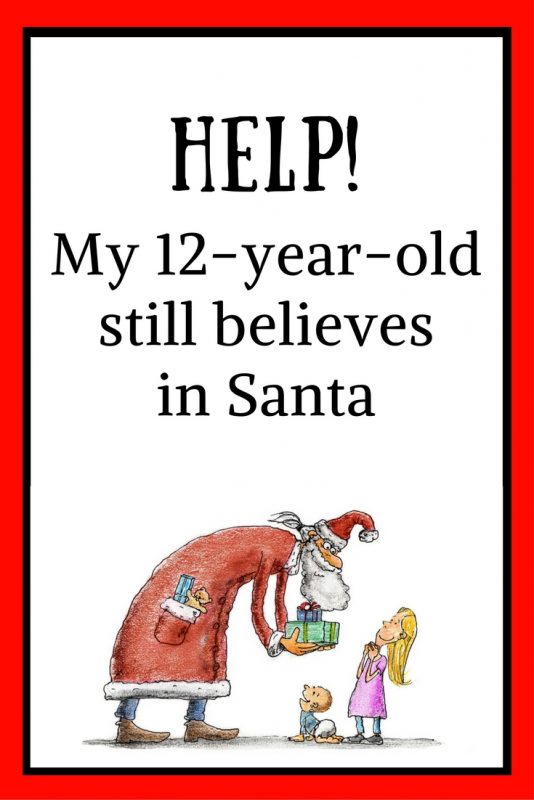 Have you ever wondered when you should truthfully answer the question “Is Santa Claus Real?” Here are some thoughts on when is the right time to come clean with your kids. I blame myself, really. My incessant need to make it so real for my kids that they’d believe for years and years.

The first Christmas after my oldest daughter was born, I vowed to my husband that she’d never figure out the truth about Santa the way I did. I was going to be more clever. Cover my tracks.

My daughter was just 10 months old when her first Christmas rolled around. She had no clue who Santa was. But every Santa gift was wrapped in special paper. No tag from Santa bore my handwriting. I was hardcore right from the start.

Still, I knew it would happen eventually, and I dreaded the day my sweet, innocent child would utter those four words that would change Christmas forever: “Is Santa Claus real?”

I suppose I should be thankful she and her nine-year-old sister have spared me from having to break their little hearts by confirming their suspicions. So far, I haven’t had to tell them that the real Santa isn’t a magical man who rewards them with gifts for their good behavior. It’s just me.

But with the oldest now two months away from her official induction to tweendom, I’m about ready for her to call my bluff. Because how on earth can a child so intelligent still believe something so impossible?

The Real Santa Would Be a Lot Noisier

I really don’t know if I should be flattered that these kids of mine will believe anything that comes out of my mouth, or worried that their critical thinking skills are very obviously stunted.

A herd of magical flying reindeer lands silently on our house, carrying a robust, elderly man who shimmies his way down our non-existent chimney with an oversized sack of gifts and moves through the house — wearing heavy boots no less — to retrieve cookies and milk before somehow getting himself back up the (still non-existent) chimney and flying off to the next house?

And no one hears anything?

I’ve been surveying other Moms with kids of the same age to find out what’s happening at their houses. Is mine the only 11-year-old who believes? She’s already told me she’s the only one in her class who does. I’m starting to wonder if I’m being duped.

According to my completely non-scientific study, it’s a girl thing, and there’s a consensus among my Mom friends that the kids who still believe might only be saying so because they’re afraid admitting the truth will have a direct impact on their holiday bounty. Which, at my house at least, is true.

I’m looking forward to the day my kids stop asking for game consoles and tablets because they’ll know it’s my pocketbook they’re coming from and not some elf-run factory at the North Pole.

(Seriously, how are these kids not catching on to this?)

Over the years they’ve reached certain conclusions. The Santa who appears every year at a church bazaar we attend, for example, is definitely not the real Santa. They know this because they’ve caught him on more than one occasion pulling down his beard to scratch his real (grey) mustache underneath.

And the Santas at the mall aren’t the real Santa, either, because Santa can’t possibly be at every mall at the same time. Plus, he’s very busy this time of year. But if they have a real beard, my kids have decided they are Santa’s recruits. They definitely know The Big Guy, so it’s safe to leave a wish list with them. They’ll make sure the real Santa sees it.

I know I’m responsible for this madness. When my oldest daughter was two and finally starting to understand the concept of Santa, I was so excited that I took her to see every Santa within a 50-mile radius. That is until she asked me, “Why does this Santa look different from the last one?”

I had to regroup. Remembering my vow to keep her believing for as long as any child has ever believed, I’ve allowed her and her sister to sit on the lap of only one Santa per year ever since.

And they’re not going unless he has a real beard. The Age Most Kids Figure It Out

According to psychologists, believing in Santa can be beneficial to children because it teaches selflessness and service to others. In most cases, eight or nine is the age that children stop believing in Santa, but not for the reasons you’d think.

While most parents would probably blame their child’s peers for blowing the whistle, it actually has more to do with the normal development of a child’s brain.

Between the ages of three and seven, children are more willing to suspend reality so things make sense to them. They believe Santa’s reindeer can fly and that a man can travel to every house in the world in a single night because they’re told it happens, and the story is reinforced over and over by many people, making it more believable.

By the age of eight or nine, however, most children start to question the mechanics of Santa’s operation. Their critical thinking skills take over and they begin to realize it’s physically impossible for reindeer to fly or for one man to travel to all four corners of the earth in one day.

So should you tell your eight- or nine-year-old the cold, hard truth when he or she asks, “Is Santa Claus real?”

Chances are, your child (like mine) may never come right out and ask. More often, children begin questioning the validity of Santa and look for clues to confirm their suspicions. Psychologists say this is another indicator of normal cognitive and emotional development.

Yes, you could come right out and admit it’s you who’s been eating the cookies and carrots they’ve left out for Santa and his reindeer all these years, or you can do what this Mom did and explain that while Santa Claus himself is not a living man (I mean, really kids? The guy would be nearly 1,750 years old by now) what he represents is very real.

The important thing to remember is the story you’ve been telling them all these years about Santa has been for their benefit, not yours. If your child isn’t ready to hear the truth, don’t force it on them, but when they’re ready to give up the fantasy, follow their lead and let them.

Whenever that may be…

Dianne Duckett is a 40-something mom of 2 pre-teen girls who manage to make her both proud and a little crazy every day. In her spare time she reads biographies and jogs. (Just kidding… she naps.)