This was my project for Round 1 (the bead round) of One Crafty Contest. The projects were submitted anonymously to keep things fair, but voting is closed at this point so now I get to share the full tutorial with you! Unfortunately I didn’t make it through to Round 2, which is a bummer because I had some fun projects planned for the other materials. But I’ll probably just work on them and share them anyways later!

Our apartment has hardwood floors which I like the look of, but they aren’t as warm or soft as carpeted floors. So anytime I’m home I wear a pair of moccasins as house slippers to keep my feet warm. JM just bought me a new pair of moccasins for Christmas last year because my old pair was literally falling apart. They are about 12 years old and the stitching was coming apart, the fur trim had come unglued, and our cats even ate some of the original beadwork!

I love my new pair of moccasins and I’m wearing them all the time now, but the bead round of One Crafty Contest was the perfect excuse to bring a little life back to my old pair! 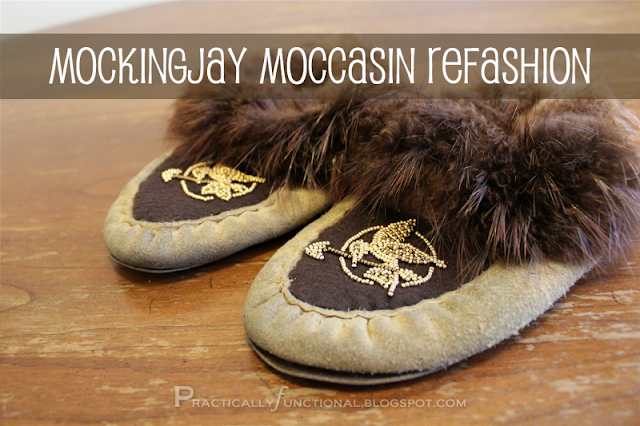 Overall the idea was simple, but the execution was a little more difficult; those seed beads are super tiny and hard to manage! I knew I wanted to do something fun and Hunger Games related, so I decided to replace the original beaded flowers with mockingjay pins. I used the following materials:

Here’s what the moccasins looked like before I started:

I started by removing the beaded flowers from both moccasins. This part was pretty simple, I just found a string, cut it with the seam ripper, and started pulling off beads. (And of course I kept them, you never know when I might find some use for them!) I found out after pulling off the beads that the original flower shape had been drawn on with pen. I tried to clean it off but it wouldn’t budge, so I decided to just cover the whole top piece with a new piece of fabric (the brown felt) instead of re-beading onto the original fabric.

Seeing the penned outline of the flower on the moccasins gave me a good idea for how to bead the mockingjay pins onto the slippers. I was originally trying to plan out on paper out how to string which color of beads, and how many, onto the thread, then where to tack it down, and then how many more beads of which color had to go on, etc. etc. etc. But that was just WAY too complicated. I ended up finding a picture of the mockingjay pin online, printing it out, and then transferring it onto the brown felt by eyeballing it and drawing the outline by hand.

You can see the rough outline of the pin on the felt above. It was very crudely drawn, but that part didn’t matter too much because the outline was just for basic shape and sizing. I used the printed pin as a guide for details and to figure out which colors went where (the darker beads were used for the shaft of the arrow and for the shading in the wings and tail).

The easiest way to bead something (as I found out through trial and error) is with two sets of needle and thread. Use one needle just for stringing the beads, and use the second to tack down the string of beads in strategic places. I poured out a few of each color of beads onto a plate, threaded both needles, and got to work. 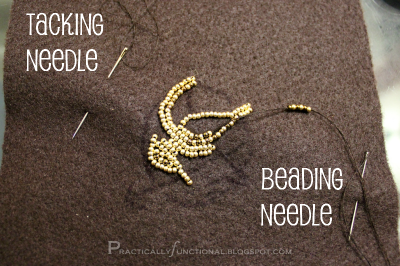 I won’t detail every step of the process because it’s fairly simple once you get the basic idea. I started at the beak and poked the skinny beading needle up through the back of the felt right at the tip. Then I strung a couple of gold beads onto the needle and laid them out approximately along the line of the beak. Then I used the other needle and thread (tacking needle) to tack down the string of beads with a little stitch about every third bead or so. I continued on like this stringing beads, laying them out along the outline, and tacking them down with the second needle until I was finished! (Geez, it makes it sound so simple, but I’ll tell you right now, this was a labor of love…those little beads kept spilling all over the place, my hands cramped up from such tiny, precise work, and my eyes got tired from staring at such small things!)

Once I was finished with the beading I cut the felt into roughly the same size and shape as the top piece of the moccasin. I put a tiny dab of craft glue on the back of the felt behind the beads and pressed it onto the slipper to keep it from moving while I sewed it on. Then I used a simple whipstitch around the edge of the felt and down through the seam that is already there in the top of the moccasin to hold it all together. The whipstitch was great because it pulled the edges of the felt down into the existing seam, meaning I didn’t have to hem the edges of the felt at all and it fit perfectly! 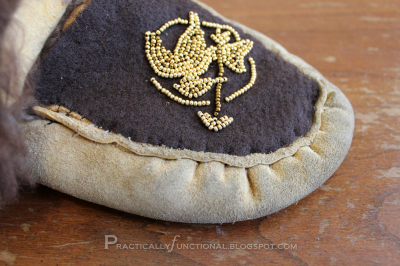 While sewing I also stitched up the pieces that were falling apart. Once the stitching was done I took another tiny dab of craft glue and glued the fur trim back down around the edges of the slipper and I was done! 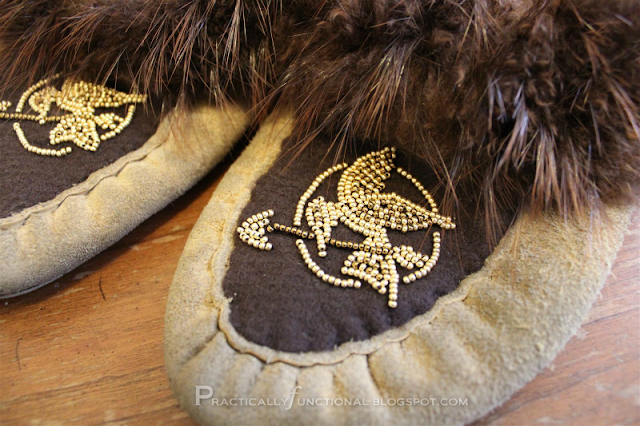 I am SOOOO thrilled with how they turned out, and I’m super juiced to have a second pair of moccasins to wear around the apartment again!

Do your feet get cold when you’re barefoot or is it just me?

I almost never use beads for projects so this was really fun. There were some great submissions in the bead round; I was super impressed with the other projects. What other fun things could I do with beads? Have you done a fun or wacky bead project recently? 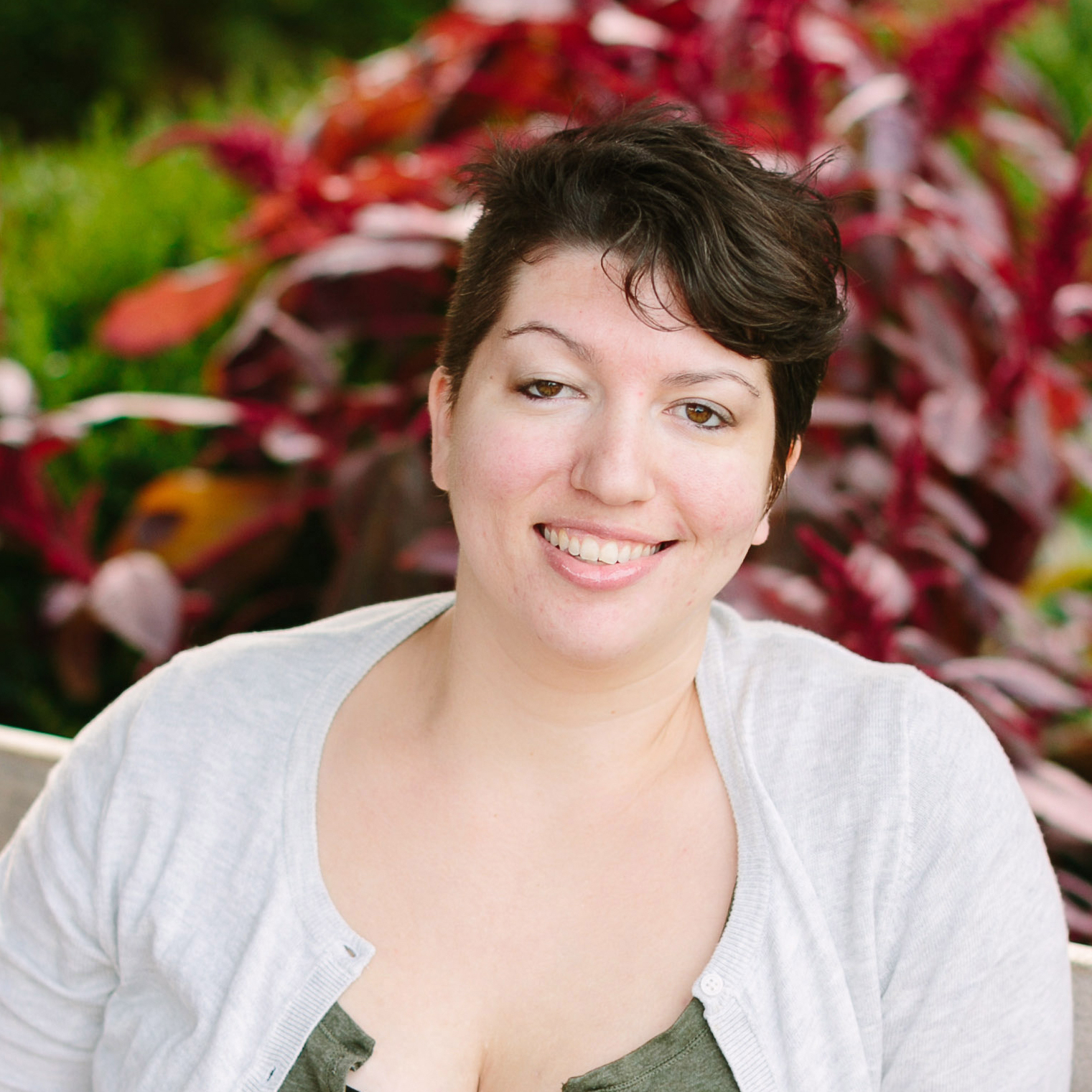